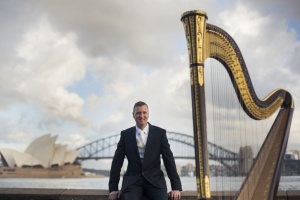 Owen Torr is a Sydney based harpist and harp teacher.  Training at the Sydney Conservatorium as a clarinetist and harpist, Owen continued his study at the Salzedo Harp Colony with Alice Chalifoux.  Owen has worked with internationally renowned musicians such as Yo Yo Ma, Vladimir Ashkenazy, Kiri Te Kanawa, Charles Dutoit, Marvin Hamlisch, and Julie Andrews.  He has played principal harp with the Sydney, Singapore, West Australian, Tasmanian, and Melbourne Symphony Orchestras. He is a regular performer with Opera Australia and the Australian Ballet at the Sydney Opera House. He has performed at the Royal Albert Hall in London, and the Concertgebouw in Amsterdam, and has played on the soundtrack for films including “Australia”, “Happy Feet”, “Jumper”, and “Daybreakers’. You can hear Owen play at the Chris O’Brien Lifehouse, a specialist cancer hospital, where he volunteers as part of the Living Room project for holistic living. Owen has over thirty years experience teaching both clarinet and harp, and has taught many enthusiastic students of all ages.  He teaches out of his home in Redfern East.