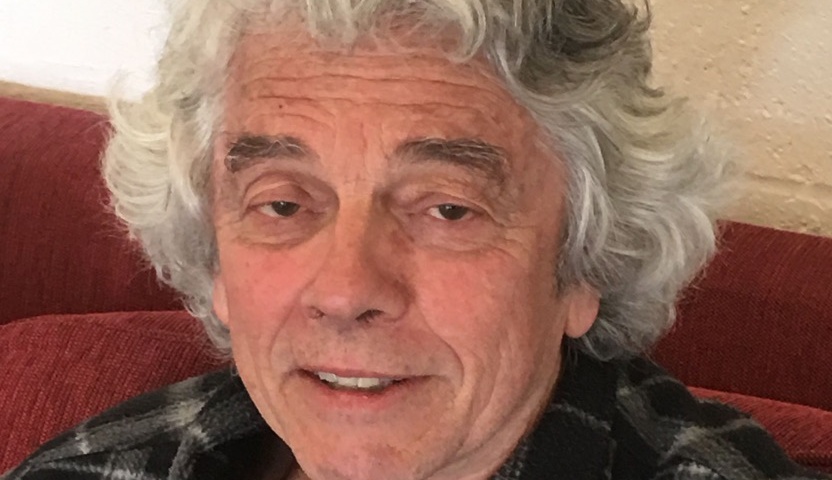 How did you start making harps?
Accidently. I was going to Peter Kempster’s weekly instrument making, access to his workshop, and he unfortunately passed away and I was talking to his widow, and she asked me to finish off a few harps, and the phone didn’t stop ringing. So I didn’t intend it, it just happened, and Iearnt on the job.

But you were already an instrument maker…?
It was a hobby really, I was interested in making anything with looped backs, I made hurdy gurdies and lutes of course.
I still make those, but I was mainly fascinated by bending and cutting the wood – the craft of it.

Peter Kempster was the first one to make harps in Australia – is that correct?
Well, to my knowledge. There may have been other people – Rob Forester was making them fairly early on. He was a carpenter really, but he made these really nice harps.

Peter Kempster was quite an eccentric character, do you have some personal memories?
Well, about his character – he either liked you or he didn’t, and when he liked you you know about it! I think it goes with the territory of being stuck in a workshop producing one thing year after year.

For him it started as a hobby. Huw Jones was his neighbour, and he would complain to Peter how he couldn’t get a decent training harp for students, and asked if Peter could make them. So he made one, and he didn’t stop – he made over 600 harps. It meant that people could buy harps affordably, and start playing the harp.

How did you arrive at your own distinctive design for your own harps?
Well, I became aware of what a sound on a harp can produce, and so I designed one and I scrapped the square back [from Peter Kempster’s harps] and made the round back.
Peter actually had some old round back shells that he was going to make up into harps, and I brought them and made a few of those. They were maple and the tone was considerably different.
So I just worked step by step towards the harps that I make now, slowly, taking one change at a time. It’s been a gradual process.

So it’s changed over the years. But you’ve got one vision about the kind of harp you like, and the kind of sound and tension.
Yes, well, I consciously restricted myself to one harp basically, 2 sizes. This was based on Peter’s legacy in fact. Huw wanted a pedal harp tension strings, so Peter used pedal tension, and I followed that as a tradition, not knowing a lot about harps it just seemed to me to be logical.
And I’ve been aware that I could have made folk harps, there’s a big market for it. But I think it’s better to restrict yourself to do a limited range of things really well, rather than trying to spread yourself. It’s different technology [folk harps] – different types of strings, different shapes.

How would you describe the specific characteristics of your harps?
Aiming for, and I think achieve on the whole, brightness and warmth at the same time. That’s what I’m trying to get – warmth – especially in the mid-lower [registers]. But with an edge.  So I suppose a rounded sound. I like getting the full range of possibilities from the strings. But with brightness in the trebbles.
It’s trickier than it sounds!

But it is a distinctive and particular thing. Because you stick to the same harp, there’s a particular sound quality that’s yours.
I think so. Actually, Rosemary St John’s harp, the old Werlitzer, was my first introduction to top quality pedal harps, and that sound just stuck in my head. That’s the sound I like. Of course I’ve since heard lots of other pedal harp, and I like them probably nearly as much. But it’s something in the back of my mind that I first want to hear when I first put the strings one. Although it’s not as good as I like every time!

But it’s not like there’s a standard where I can say “I’ve done it, I’ve achieved the sound” – there’s always continuous improvement.

Can you tell us a bit about the materials you use? Is it a challenge to source wood?
Yes – I know where to get it, but it’s a lot pf phone calls and emails and C02 in the air. It’s not an attractive thing, but we don’t have the right woods in Australia for the neck that that I’m aware of. It must be spruce as far as I’m concerned. I’ve tried Kingbilly pine but it’s not strong enough. So I stick to Sitka Spruce. But I do try to source all my wood from plantations.

Do you have any assistants, or is it just a 1 person job?
It’s just me in the workshop. I’ve thought about it, but it’s really an economic thing. There’s not enough money for 1 person, let alone 2. It’s a production, and that needs capital, which I don’t have.