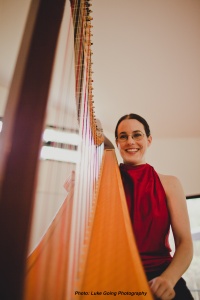 Acclaimed New Zealand harpist Ingrid Bauer is making her mark on the classical music scene. Recent invitations include the 2014 Huntington Estate Music Festival, where Ingrid worked with musical luminaries including Emma Matthews and the Amaryllis Quartet. The festival’s artistic director, Carl Vine (AO), described her as a “fantastic new find”.

As a soloist, Ingrid has performed with the Australian National Academy of Music Chamber Orchestra, the Bay of Plenty Symphonia, the Kapiti Concert Orchestra, and the Wellington Youth Orchestra. Ingrid has given solo recitals in six countries, and has a solo CD, Dreambird, on the Master Performers label.

Ingrid loves to make music with others, and has played in a wide variety of ensembles, including with Australian jazz legend James Morrison. She is a founding member of the Australian harp septet SHE, and plays casually in the New Zealand Symphony Orchestra, Orchestra Wellington, and many other orchestras across Australasia.