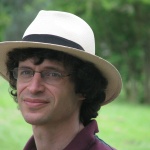 The Israeli born pianist Arnan Wiesel is a winner of national and international prizes including Israel’s highest prize for young musicians, the Francoix Shapira Prize. A finalist in the Sydney Piano Competition, his career as solo and chamber musician has taken him to Australia, USA, Europe, Asia, New Zealand and Israel. Concert appearances include concertos with the Stuttgart Philharmonic, Israel Philharmonic Orchestra, Hamburg Mozart Orchestra, Danska Sinfonietta and recitals in important music centres as the Concertgebouw in Amsterdam, Münchner Gasteig, Frankfurt Alte Oper, Zurich, Geneva,Budapest and Moscow as well as appearances at the Schleswig-Holstein Festival, Insel-Hombroich and Münchner-Klaviersommer Festivals in Germany and the Israel Festival.

Arnan has acted as Head of the Keyboard area at the ANU SoM from 2010 – 2012 and has been the artistic director of the Australian International Chopin Piano Competition held in 2011.